Report: Another December, another trip to Alpen Mountain.  Alpen is one of my favourite early season trips due to the first part being entirely on logging road and so you can always drive right to the point where you can start skinning.  For a detailed description of the route, please see one of my trip report from 2011 here.

The Whistler alpine forecast for the date of the trip was for temperatures down to -21 in the alpine and it hadn’t snowed in weeks, so we were all a bit nervous about we would encounter on the route but headed up towards the mountain nonetheless.  I went to Alpen in December 2011 and December 2012 and in those years we were able to start skinning from around 550m and 450m, respectively.  This year however, we were able to drive up to 1050m, shaving at least 4.5km off of the distance that I had to cover in previous years.  This would make for a short day.

The ascent took us just a bit over 3 hours, including a snack break at the snowmobile hut.  Up to the hut there was very little snow and in a few places there weren’t any great lines to ascend through the trees, but not far above the hut the snow became deeper and to our pleasant surprise, it was remarkably light powder!  No ice to be found at all despite how long it’d been since it last snowed.  Even better, the sun was beating down all day and there was no wind, and so even though it was around -10 degrees on the summit, everyone was happy to spend the better part of an hour on top before starting down.

Once we were down to where we left our skis below the summit, the next part of the descent was through really nice powder, and we found a route through the trees back to the road that only involved a couple minutes of bush-bashing.  The road was quick to descend as always, and we were packed up and heading back down the road before 3pm.  In all, it was a surprisingly good day of touring and skiing!  Thanks to everyone who came out!

Difficulty: 2.  Difficulty rating is 2 provided that you swing around to the south ridge near the summit.  If you head straight up on the west ridge, then there are a few short, mildly exposed steps of 45-50 degree snow.

Report: For an early season day where I had to be back in town by early evening, my dad and I decided to go for a “short” ski trip somewhere in the vicinity of Squamish.  Wanting to avoid the crowds on Paul Ridge, the idea came to attempt the little known Alpen Mountain.  Inexplicably missing from John Baldwin’s ski touring guidebook and only an hour’s drive from Vancouver, Alpen turns out to be a great warm-up ski ascent with no crowds.

Leaving New Westminster a bit past 8, we drove up towards Squamish, headed onto the Mamquam FSR, and hit solid snow on the Alpen Mountain Spur (ungated at this time of year) at around 550m.  After taking a bit of time to get the car turned around, and get our ski gear on, we were able to set out on skis right at 10 o’clock.  Following some old snowmobile tracks, we gained the first ~800m of elevation on the main logging road (easy to follow, it’s the only non overgrown road in the area) under grey and foggy skies.  However, around 1400m, not far below the old snowmobile hut at the end of the road, the skies suddenly cleared and we were presented with amazing views of Sky Pilot, Ledge, and Habrich to the west.

From the snowmobile hut, we followed what appeared to be ski tracks off to the north east, but soon realized that we were heading in the wrong direction to the peak, and had to contour back to the south, losing some elevation.  Next time, the smarter route decision would be to turn right at the hut and head south, in order to directly hit the main basin below the summit of Alpen, where the west ridge can be easily obtained about 100m below the summit.  Still early season, there was a mix of rock, ice, and snow on the ridge of Alpen, and so we left our skis behind about 100m below the summit and climbed straight up the west ridge, just above the north face.  This route requires negotiating a few short, mildly exposed, steps of 45+ degree snow, and from the summit we learned that the smarter route would be to swing further around to the south of the summit before heading straight up.

We summitted Alpen just before 2pm, and after stopping for 15 minutes for food and photos, made our way down.  The first few hundred metres of skiing were good powder, but once on the logging road, what had been soft snowmobile tracks in the morning had frozen into icy ruts that made the run down the logging road both tiring and bothersome.  Nonetheless, we made it back to the car just before 4pm, for a total round trip of 6 hours, with a bit over 1200m net elevation gain.

Verdict: 2/3.  Worthwhile for its convenience and varied terrain.  No crowds! 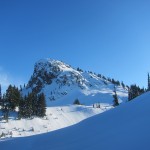